“Perfect Are Only Those Deeds Blessed By God”

For months the St. Sava Serbian Orthodox Church in San Gabriel, California has been actively beautifying their church, parish hall and grounds in preparation of hosting the annual Diocesan Days celebration on this jubilee year 2019, as we mark the 800th anniversary of the autocephaly of the Serbian Orthodox Church. With the blessings of His Grace Bishop Maxim of Western America the annual Diocesan Days celebration came to an official start on Friday, August 30, 2019, as distinguished guests, clergy, monastics and the faithful began to slowly arrive to St. Sava’s Church in San Gabriel. As is the established custom, this annual celebration in the Serbian Orthodox Diocese of Western America, per the blessings of the diocesan bishop, dedicates the first day and first order of business to a clergy seminar. This year’s seminar was led by the Most Venerable Archimandrite Metodije of the Royal Lavra Hilandar Monastery.

Following lunch Bishop Maxim introduced Fr. Metodije who delivered a moving talk on the role of Mount Athos in the celebration of eight centuries of the Serbian Orthodox Church. After all, Fr. Metodije noted, St. Sava was abbot of Monastery Hilandar at the time he became the first Serbian Archbishop. Moreover, St. Sava played a great role not only in the life of the Serbian monastery but throughout the Holy Mountain. There is an opinion that the entire Athonite monastic community rejoiced exceedingly upon hearing of his appointment to the rank of archbishop. The reason was that the Latins, who had control of Constantinople at that time, had appointed one of their bishops to the Diocese of Ierissos, under whose jurisdiction Mount Athos belonged. As the Athonite monks were firm and staunch defenders of Orthodoxy, they did not want the Latins to tonsure their monks, ordain their hierodeacons and hieromonks. Thus, St. Sava’s election brought much joy as he, himself, was an Athonite monk, and now would be able to tonsure and ordain monks throughout the Holy Mountain, which, in fact, he did.

Not only was Saint Sava respected at one time in history among Athonite monks but even to this day. As Fr. Metodije noted, eight centuries have passed since the time of Saint Sava and yet he is still loved greatly by monastics throughout the Holy Mountain. In fact, it is hard to find a monastery that doesn’t have a fresco of him or his father St. Symeon the Myrrh-bearer.

When Monastery Hilandar had begun planning the 800th-anniversary celebration some years back they realized that due to reconstruction that is still being completed after a fire that broke out fifteen years ago, hosting such an event would be nearly impossible. Thus, they submitted a written request that such a celebration be held not only at the Serbian monastery but that it be held at the Protaton, the major church at Karyes, thereby making it a conciliar celebration which would include the abbots and monastics from all the Athonite monasteries. This request was received with much joy. Fr. Metodije evoked a similar celebration that took place a few years ago at the celebration of the 200th anniversary of the repose of St. Nicodemus of the Hagiorite. It was during this celebration that the Abbot of the Great Lavra, Fr. Nicodemus, told Fr. Metodije: “You know, Father, Saint Sava was much greater than St. Nicodemus. True, I bear his name, but the fact is that Saint Sava was a much greater Saint.“

But not only on Mount Athos. As we know, upon his election as archbishop, one of the first things he did was to translate the canonical and liturgical books from Greek into Serbian. These translations took place in a monastery near Thessaloniki. Today in Thessaloniki there is an organization called the Mount Athos Center, run by a governing body of Board of Directors, presided over by the Mayor of Thessaloniki (ex officio). Monastery Hilandar suggested to this Center that the 800th anniversary of the autocephaly of the Serbian Orthodox Church be commemorated there as well. Thus, another aspect of the life and work of St. Sava will be highlighted where Serbian and Greek academics will commemorate his great contribution to Orthodoxy.

Fr. Metodije concluded his talk with a moment recorded in the Life of St. Sava. It is said there that his heart was filled with sadness when he realized that he would have to leave the Holy Mountain. He had planned on spending the rest of his life there in prayer and contemplation. According to his hagiographers, the Most Holy Theotokos appeared to him in a dream, comforting him that the Lord had willed him to organize the Church in Serbia. With this divine comfort filling his heart he was able to achieve many deeds which we not only commemorate on this jubilee year but, indeed, are witnesses of and experience in our active life in the church. Just as that was the will of God so was the founding of Monastery Hilandar twenty years prior to that. For we know that when Saint Sava was on Mount Athos with his father they were visited by an Elder from the desert who advised them to renovate one of the abandoned monasteries on the Holy Mountain for Serbian monastics. In doing this they established Hilandar Monastery which remains the only Serbian institution that has lasted that long.

Archimandrite George (Kapsanis) of blessed memory would often say, Fr. Metodije recalled if a person wants to do something out of their own free will God allows it. After all, we are free to do anything. In the end, it might even be a good thing. But perfect are only those deeds blessed by God! 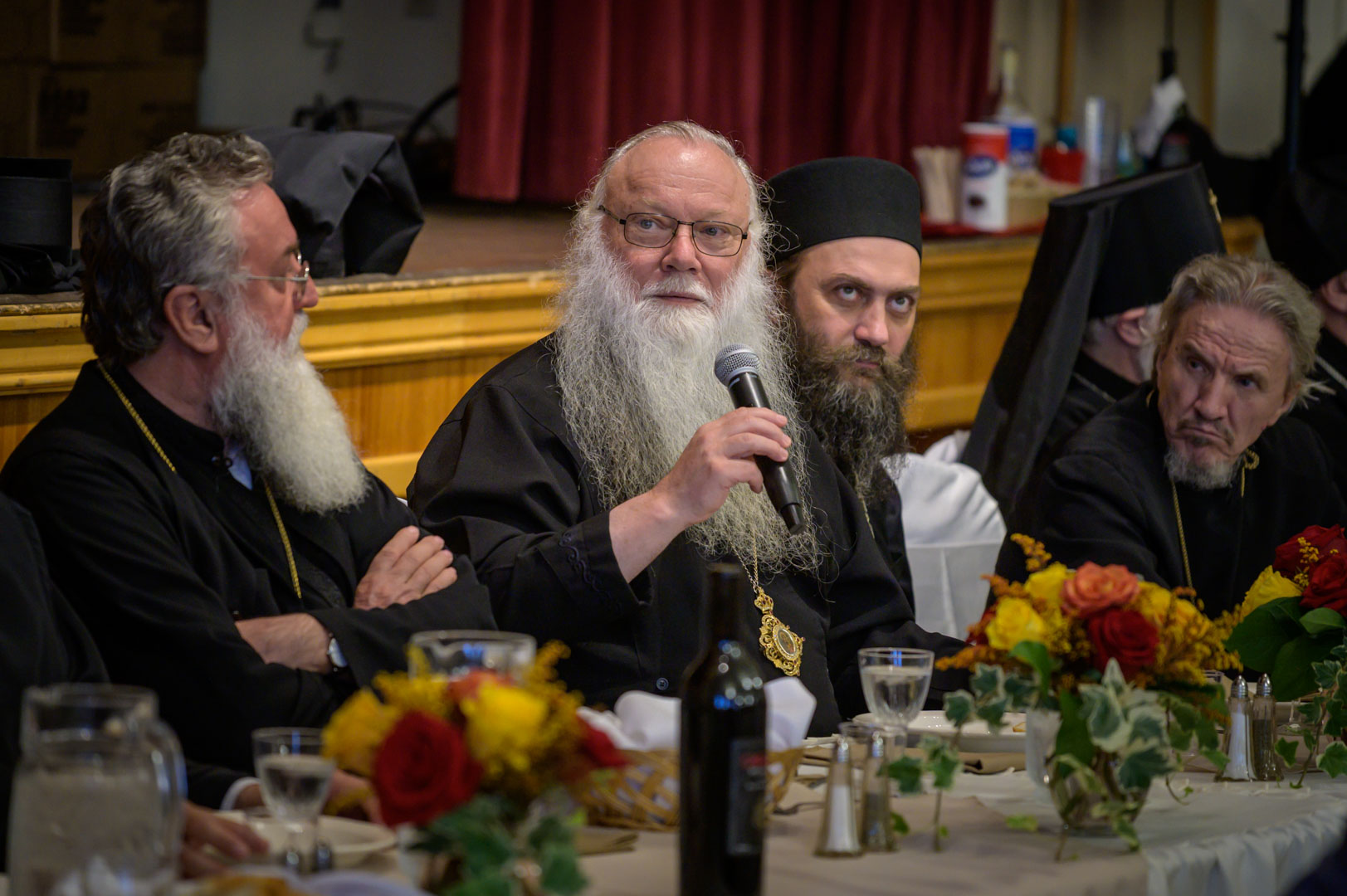 St. Sava Church San Gabriel, Calif., during the celebration of the 800th Anniversary of the Autocephaly of the Serbian Orthodox Church.

Fr. Metodije’s talk served as a fitting and inspirational start to this much anticipated Diocesan Days celebration. After a brief question and answer session the clergy and laity were dismissed: some to their hotels, some attended the Diocesan Council Meeting and others the Diocesan Kolo Sestara meeting.

The evening Vespers began promptly at 6 o’clock with the arrival of the hierarchs: Their Graces Archbishop Peter of Chicago (the Russian Orthodox Church Outside Russia), Bishop Longin of New Gracanica-Midwestern America, Archbishop Benjamin of San Francisco (Orthodox Church in America), Bishop Mitrophan of Canada, Bishop Daniel of Santa Rosa (Orthodox Church in America), Bishop Grigorije of Dusseldorf and Germany, Bishop Teodisije of Kosovo and Metohija, Bishop Irinej of Eastern America, Bishop David of Stobi (Archdiocese of Ohrid), Bishop Sergije of Bihac and Petrovac, Bishop Kirilo of Buenos Aires and Bishop Dimitrije of Herzegovina. Fr. Mihailo Smiljanic represented Bishop Andrej of Vienna. Among the special guests were the seminarians from Prizren Seminary Dimitrije Nikolic, Milan Kostic, Marko Vilotic and Strahinja Sabic together with their professor Dejan Ristic. Nikola Stankovic was also in attendance from TV Hram in Serbia.

Before the beginning of Vespers at the front entrance of the church Fr. Metodije, Abbot of Monastery Hilandar, presented to His Grace Bishop Maxim an official, authentic facsimile, icon of the miraculous icon of the Most Holy Theotokos “Trojerucica“, produced and stamped at Monastery Hilandar for this occasion and to be kept at St. Sava Church in San Gabriel. The host priest, Fr. Predrag Bojovic, together with neighboring priest Fr. Nikola Ceko, carried the icon in, led by Bishop Maxim and the visiting hierarchs. Once the icon was solemnly installed on the throne the Vespers service began with His Grace Bishop Irinej preciding. For many, this was the first time to see the newly frescoed St. Sava Church which even the local parishioners commented that it’s as if they received a new church. They are magnificent and awe-inspiring.

Dinner followed the evening service. Typically, Friday evening of Diocesan Days is an open Questions -and-Answers session with the keynote speaker. This year’s event, however, included a panel of thirteen hierarchs. A lively discussion ensued about how to inspire one to a higher calling in the life of the church. Not only did the hierarchs inspire such a question but also the seminarians who hail from the much-suffering region of Kosovo and Metohija. In response to this inquiry, one of the students stated that it was particularly this suffering and persecution that served as his calling and inspiration to enroll in Prizren Seminary.

The evening ended with fellowship until finally clergy and the faithful slowly made their way to their hotels and homes to rest for tomorrow’s full day of activities!