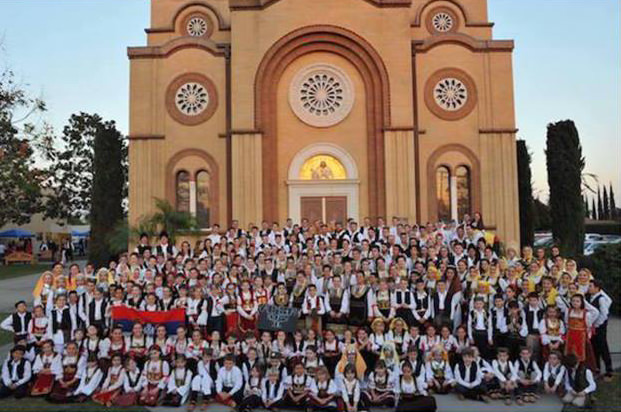 In 2002 the folklore group at St. Sava Church adopted the name Kalemegdan. They performed at church events across Southern California.

In 2005, the group went on a trip to Serbia. They performed in Soko Banja, Oplenac and Vrnjacka Banja. They also performed for Vladika Jovan (who was previously assigned the Western American Diocese) in Kragujevac.  The group represented the church in a very professional manner in all places.

They were invited to perform at the American Film Institute for the premiere of an upcoming film.

Around 2008, the group was comprised of girls only (approximate ages 6-12).  They performed at Earth Day festivities in Ojai.

In 2009, Kalemegdan was established as an official church organization/ affiliate.  The goal was to keep the youth interested in carrying on traditions and heritage to a new generation.

In Februrary 2010, St. Sava held its first “Folkfest “which has continued every year since.

The group began taking min-trips to places like San Francisco, Phoenix and Las Vegas by bus. These long trips were good bonding experiences for both children, parents, and others.  A goal was set to take the group the “old country”.

They were invited to perform at a fund raising event in Beverly Hills with HRH Prince Alexander and Princess Katherine. A few months later, they performed at another fund raiser at UCLA’s Pauley Pavilions organized by the Tennis Channel.  The Tennis Channel asked the group to perform.  The World Number One tennis player, Novak Djokovic, also participated with the group before the matches began.

In 2013, the group went to Serbia and other “Former Yugoslavia” republics. They performed on Radio Televizija Srbije (RTS) on the highest Nielson rated show in Serbia. They also performed in the city of Cacak (where there were guests in City Hall),  Republika Srpska and Montenegro. As well as performing, they visited churches and monasteries throughout the former republics including Ostrog and Cetinje.

In 2016,the group went to Niagara Falls to participate in the recognition of expansion of the Nikola Tesla monument and surrounding park in Canada.

The group once again went to Serbia, Republika Srpska and Montenegro.