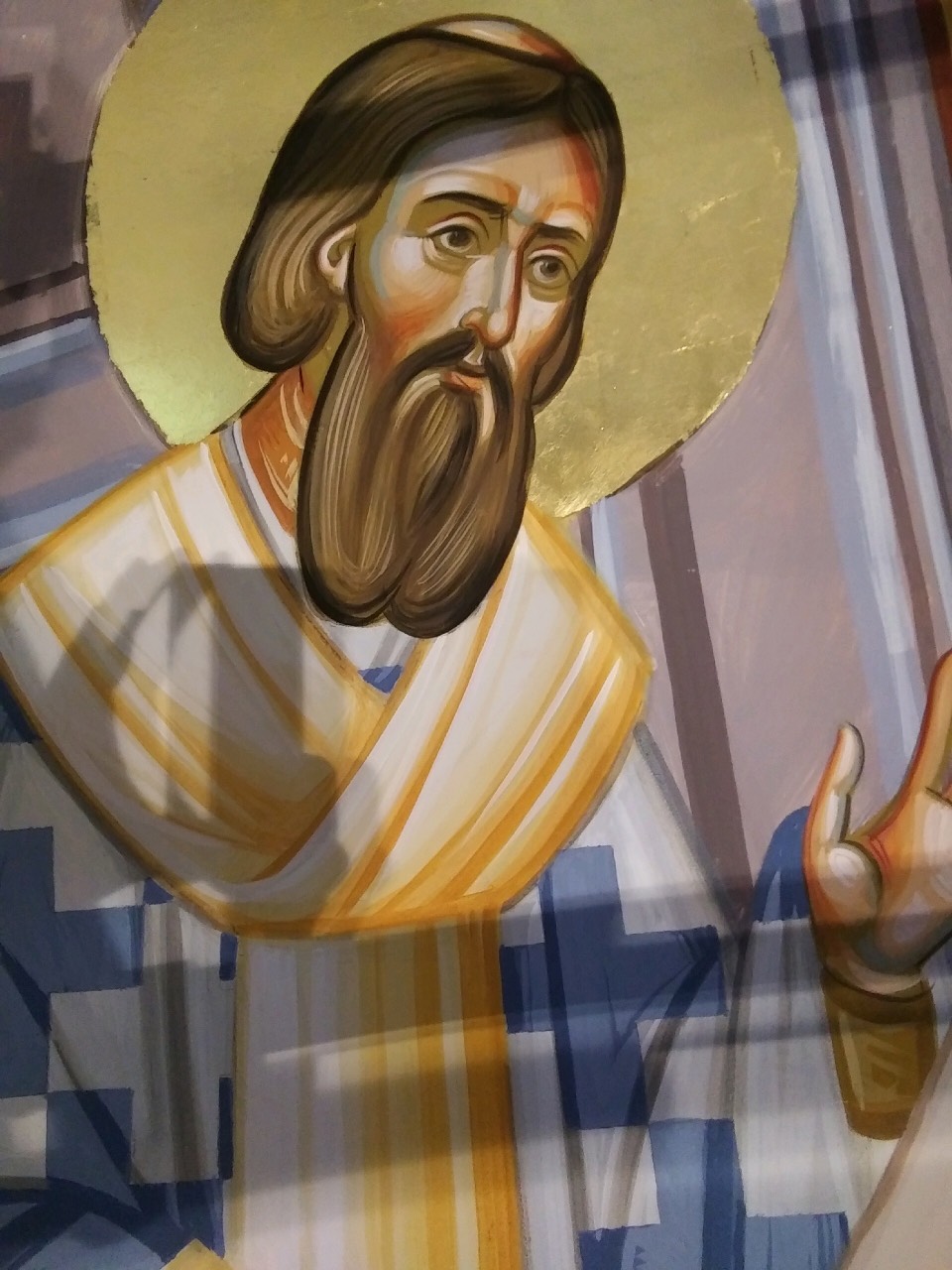 “For such a High Priest was fitting for us” (Hebrew 7:26). These words of the Holy Apostle Paul, which my brother in Christ Father John read, send a message to all of us Christians from the first century to the present day, instructing and reminding us of the coming of the High Priest Christ and His Royal and High Priestly Ministry and His salvific work.

These words from the first century to the present day, can be completely and rightfully applied to those high priests, those national champions who were Christ-like, who became like the Lord God and His icon, restoring in themselves and elevating in themselves the image of God, which shone forth to the people. Who better deserves such words and such praises than our Holy Father Sava, the First Archbishop and Enlightener of the Serbian people? He was the father of our nation, the one whom we celebrate, the one whom we are proud of, the one whom we try to emulate, the one who gave birth and revitalized his people, his nation, the Orthodox Serbian Nation which he enlightened and continues to enlighten to this day, through the Church of God, the Orthodox Church, the Church of Saint Sava, the Church that looks to him as a leader, leading to Eternal Life. We sing in his troparion with one voice, one heart, one mind and one faith – the faith with which he bore us and prepared us and empowered us to walk toward Eternal Life.

People are quick to offer compliments and do so often not caring to whom or what kind of compliments they offer. Thus, when a moment such as today comes about, when we celebrate our Holy Father Sava and when we ought to say beautiful words, suddenly those words sound inadequate, somehow too simple. It becomes difficult for us to use these words knowing that many unworthy ones, praising their deeds in this world, were the recipients of such praise and words. Saint Sava was anything but ordinary! Saint Sava, as we said, gave birth to and revitalized the Serbs! From Saint Sava we learn not only of the true faith but also from his wonderful sermon recorded by Domentian his biographer in Zica reminds us and that which is inscribed and written into the wall of our church, we are reminded, “This is what I beg of you first, brothers and children, to adhere to His true faith.”These words, as you will see written on the scroll he holds, were first spoken at the famous Assembly in Žiča in 1221 in his Sermon on the True Faith. However, Saint Sava did not just teach us about the true faith. Contrary to historians who say that Saint Sava created the people’s Church, I will dare to say that Saint Sava created a churched people! Saint Sava recreated us and enriched us with the Holy Spirit not creating an ethnic Church, but rather, a church people; a people who are in church, a people who live in the Church, who breathe for the Church, who walk through this life with the Church of God and the teachings of God toward Eternal Life!

Saint Sava taught us brotherly love, the love of God, of diplomacy and true education. In other words, he taught us Holiness. He began first by enlightening himself with the unwaning light that he received from the Lord God! That is why Holy Father Justin preaches that there can be no true enlightenment (Education) without holiness. He who shines himself, enlightens! Education without holiness was introduced by a godless Europe in its humanistic idolatry and unfortunately, in recent years, we Serbs followed this trend.

Saint Sava taught us differently, teaching us the meaning of true humanism! He taught us Theo-humanism which is love for the God-man! This means that we look for and see God in every person, in all people. That we love people because they are icons, images reflecting God. He taught us not to eradicate God from our homes, our schools and hearts! Thus, Saint Sava teaches us true enlightenment, the meaning of true education.

Today, we also talk about how Saint Sava is someone whom our children should emulate. I will again dare to say that Saint Sava is someone who parents themselves should look up to! You will ask how is this possible if he was a monk and therefore never a parent? Not true! He was a parent, indeed! And, again, his troparion tells us that he gave birth to us and recreated us! If parents want to be true parents they must be like Saint Sava! This means that they must teach their children the values which Saint Sava taught his children, meaning the entire Serbian nation, and which he continues to teach us! Come, children, listen to me, I will teach you the fear of the Lord!

In the end, when speaking of diplomacy, people often like to say that Serbia is “above” east and west, since by God’s will we are geographically imbedded in the stormy Balkans between east and west. Again, I will dare say that this is not true either. Serbia is unique. Serbia is the east to the west and the west to the east! Serbia, with all its surrounding lands, is in fact a link!

Serbia has not detached or risen above anyone but rather is a country, a people, which connect east and west. Serbia followed the Eastern faith, constantly drawn by the tumultuous West which even to this day lures her wanting to make itself attractive and attach us to itself. Saint Sava forever planted in us and directed us to the Faith of the East, the Faith we are proud of, the Faith we keep, the Faith that we must preserve and for which we will answer before Saint Sava himself and before the judgment of Christ the Lord our God!

Therefore, blessed Slava brothers and sisters, blessed Slava to all, joyous Slava – Saint Sava! May Saint Sava guide each of us individually and all of us together, jointly! May he be the leader of our families, our parishes, our Saint Sava Church. The church which shows us the way to Eternal Life, which is a safe haven, which is that Ark that can only lead us to the right and true goal. Blessed and joyous Slava to our people and our schools, to our hospitals and all educational institutions, to all our homes and to all Serbs who recognize in Saint Sava the guide who leads to Eternal Life!

Through the intercessions of our Holy Father Sava, may God grant it to be so and may this day be blessed!