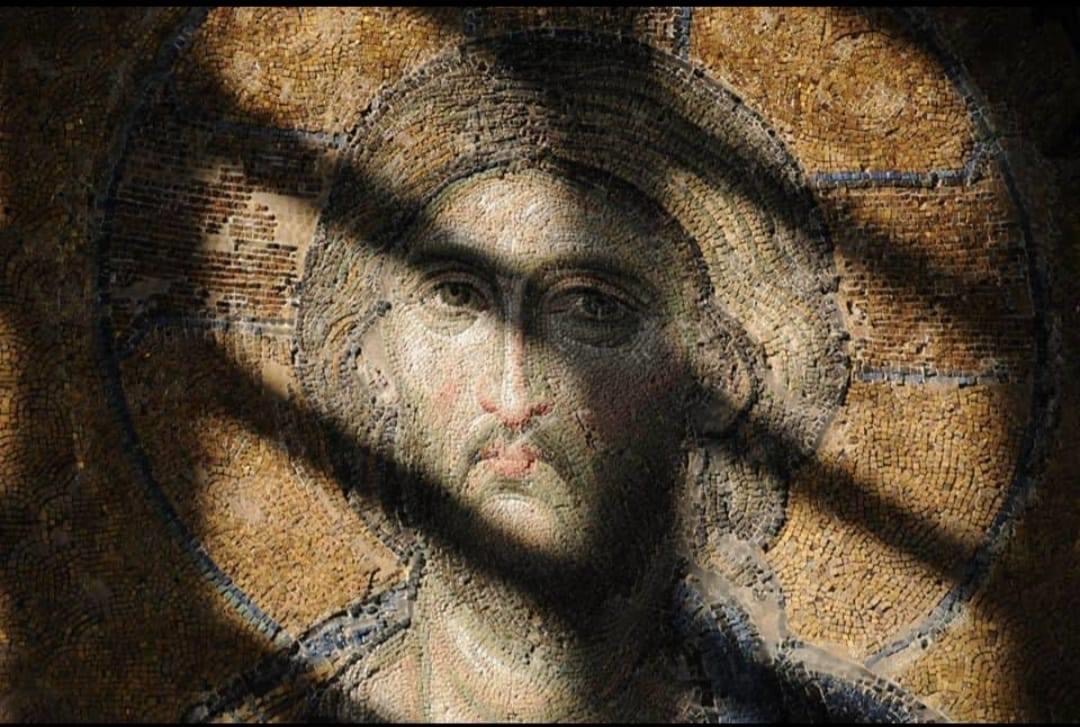 CHRIST – THE LAND OF THE LIVING

As we watch in disbelief yet another chauvinistic and misanthropic act by the self-proclaimed “Sultan of the Bosphorus”, the words from Revelation come to mind,“that you have a name that you are alive, but you are dead”. (Rev. 3:1)

In the early fourth century, St. Emperor Constantine the Great, “our countryman”, understood and adopted this truth; that there are many dead among the living, and many living among the dead. He testified to this faith by endowing a magnificent temple outside the city walls of Constantinople, in the middle of a space on which its citizens were buried.

This temple is simply called “Hora” which means land or space. Literally translated, the church’s full name was the Church of the Holy Savior in the Field (in Greek, ἡ Ἐκκλησία τοῦ Ἁγίου Σωτῆρος ἐν τῇ Χώρᾳ). However, later when this temple received a mosaic icon, representation of Christ, (ἡ Χώρα τῶν ζώντων – Land of the Living) it symbolically began to signify that it was not simply just any piece of land or space, but rather, the Land of the Living in Christ Who is the source of Life and immortality. The aforementioned mosaic composition of Christ The Pantocrator, who welcomes the worshipers to this beautiful temple, is complemented by another mosaic; an image of the Mother of God as the Container of the Uncontainable (ἡ Χώρα τοῦ Ἀχωρήτου).

Inspired by the same faith of St. Constantine, one of our contemporaries, Serbian poet, writer, and thinker Matija Bećković, encourages modern man to seriously reconsider his existence with the verse, “Only the living can die, and only the dead can live”. Thus, he reminds us of the insignificance of man without Christ as well as of the true Life, eternal and inalienable, of those in whom Christ has found a place because “God is the being whose home is the host” according to St. Athanasius.

How, then, does one explain to an Erdogan who thinks he is alive, in control, and powerful, that he is, in fact, enslaved by death and frightened of Life?

How can he believe that carpets, curtains, and various screens could obscure the Creator of all creations!? Spiritual reasoning does not miss the fact that the irrational and unbelieving “Sultan of the Bosphorus” fears the Logos of God who is the meaning and reason for everything, and that he is trying to hide Him, the Land of the Living.

How, on the other hand, can we bring the Truth closer to his citizens or supporters when it is hypostasized in Christ, the One whose image they plaster? How can we tell them that, in fact, they inflict curses and shame on their children and their faith, fearing Him in whom “mercy and truth met, righteousness and peace kissed each other” (Ps. 84:11-12) There is, therefore, no reason to fear Him Who is the bearer of such qualities and Who is the Only One who truly loves every man!

The founders of Islam understood this much better and acted more appropriately than their contemporaries. Namely, in the very beginning of Islam as a religion, we see historical testimonies of respect for Christ, the Mother of God, and, therefore, for Christians, even from Muhammad himself. One such testimony is a document written in the year 626 which consists of several provisions on topics related to the life of Christians under Islamic rule and bears the recognizable seal of Muhammad himself.

Sultan Selim I carried the original letter to Istanbul in 1517, where it is still kept to this day in the Topkapi Museum and by request of the monks of the Monastery of St. Catherine in Sinai, a copy was made and is also kept in the monastery.

“This is the message of Muhammad ibn Abdullah, as a vow to those who adopt Christianity near and far, that we stand by them. Indeed, I, the servants, the helpers, and my followers defend them because Christians are my citizens. And so, God help us, I oppose everything that is not comfortable for them. There must be no coercion over them. Their judges must not be removed from their jobs, nor can their monks be removed from their monasteries. No one is allowed to destroy the house of their faith, to damage it, or to take anything out of it to the house of a Muslim…”

It is clear then to the cultural world, that the aforementioned actions have nothing to do with religion, but exclusively with political interests and plans in the service of which their faith was placed. This is best confirmed by the recent image of the muezzin with a sword in his hand, in the middle of the Hagia Sophia – Temple of the Holy Wisdom of God in Constantinople.

We have already seen and experienced all of this many times, so perhaps we should not be surprised or taken aback by such actions, and this reference is not exclusive to the time of our slavery under the Ottomans. There have been various “sultans and pharaohs” in our recent history, who, obsessed with themselves, have similarly and insanely built cults which have followed them.

We still suffer from the consequences of their “visions” of a prosperous society, unity, and equality. We are still rebuilding what was torn down, we are still writing new icons on walls covered with limestone, we are still discovering the buried, serving memorials and Trisagion services for all those who had been denied.

Our generation, therefore, has a great task and responsibility. We need to uncover the Original Image in each of us through repentance and purification, awakening love for our homeland – patriotism – arming ourselves with faith and hope.

Let there be no confusion, there can be no true or healthy patriotism until our Heavenly Fatherland is first embraced and loved. Recovery from fatal mistakes and restoration will not occur if the Christian faith does not permeate our souls, homes, schools, and assemblies, banishing vanity, hatred, and selfish interests. Our pious and honorable grandmothers taught us such true patriotism by their deeds, more than by their words. That is why the famous Serbian novelist Momo Kapor once stated that “Patriotism is not an ideology, it is a matter of one’s rearing. This was the lesson taught to you by your Grandmother!”

When these things come to pass, I deeply believe that Christ will again destroy the gates of death, break the shackles in which we mortals and mindless people placed him, and the houses of His glory and beauty (Psalm 25:8-9) will shine again, with eternal and imperishable splendor, from the Emperor’s City and throughout the entire universe.

On the Feast of Transfiguration, 2020