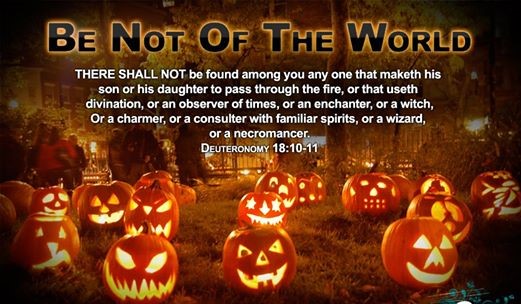 “Children have fun, they disguise themselves, they are happy, what is the evil in that?”

“Why shouldn’t I go to the Halloween party, I don’t believe in it, I’m just going to have fun.”

I think that one of the bigger reasons why the Orthodox ethos is getting weaker is that many take it for granted. Even if they believe in God, they consider him a “Good One” who will forgive all their mistakes.

“Why condemnation, God is love, you know?”

God is Love but God is not a hippie.

One cannot be an Orthodox Christian and accept syncretism (“I will believe in Christ and everything that is offered to me”). We respect other religions and their customs, but we do not adopt them as our own. Acceptance of other people’s customs would be possible if they do not conflict with the Gospel. The so-called “Halloween” holiday is essentially at odds with everything Christians believe in. Here is how Saint Bishop Nikolaj explains it:

“According to the pagan Celtic tradition, the souls of the dead would completely belong to the authority of the god Samhain, the prince of death, and it was necessary to please him atone by offering a sacrifice on New Year’s Day (then celebrated in the night of October 31-November 01), and, then,  Samhain would allow the souls of the dead to visit the homes of their families. Hence the custom of “disguising” in skeletons, ghosts, witches, and demons. In this way, the living would enter into a “mystical” community with the dead, through the act of imitating the dead and wandering in the dark (the fire of the hearth would be extinguished). It is believed that the souls of the dead who would come to “visit” were exhausted from hunger and begged for food, so they had to be fed. If one of the living did not entertain the souls of the dead, the vengeance of the god Samhain would reach them.”

Today, most do not believe in this pagan custom, but no matter how illogical and strange it is, they practice it. Disguise and wandering in the dark is a kind of worship in accordance with the mentioned belief. And maybe the Celts did not believe in Satan, but Samhain, by his function and attributes, would be their version of the same here.

So it would not be a surprise if in the future children would rush with a big smile on their faces to collect sweets at night, with a pentagram drawn on their chests, artificial blood all over their body and other morbidities that this holiday requires.

As children, we collected eggs and sweets during Easter. Along the way, we cracked eggs and had fun. For Christmas, I would go on a kind of tour as a trainee. And again, there would be a lot of sweets and fun. I was dressed as usual, I did not feel any pressure from the society to buy certain mask or clothes, nor was my host expected to have bought sweets. I wore the same T-shirt as every day, for Christmas my plaid shirt (a little more festive), and the hosts would offer me fruit, homemade cakes, eggs, prosciutto, and cherry juice.

But today that is not enough. You cannot just give a child an apple or an egg, or a baked cake, you must (!?) give a candy you bought earlier. It is expected that you reward their previously purchased mask. Young people give money for a mask-party, it is “cool and fun”. We support a trend that is alien and artificial because it is modern and desirable today.

Christians in the first three centuries said, “I will not participate in pagan worship because it would be a renunciation of my beliefs and the love with which God first loved me. I would rather die.” And they were dying for it.

Christians in the 21st century say: “I will participate in a party on the occasion of an old pagan custom, I certainly do not believe in it, so it does not count. Or I will direct children to participate in it, it is important that it is nice for us.”

And they do so because it is too much of a sacrifice for them to stay home that night and be different from most.

They say it has nothing to do with Halloween, but with masks and parties. Okay, so why is it “celebrated” on October 31st? In most schools, there is a masquerade ball during Children’s Week. Nobody sees anything wrong with children having fun. They don’t have to disguise themselves as serial killers from movies, nor celebrate someone else’s holiday. The same goes for parties. If it has nothing to do with Halloween, why is the party that date?

Halloween frenzy is another in a series of large retail chains marketing deceits in order to sell their products as well as possible. It is also used to replace Christian customs and holidays with others. A few generations later, this will happen.

Let’s be clear, markets and cafes use similar ideas to sell their product for Orthodox holidays, so today no one is surprised if they can buy “consecrated Christmas yule-log” in the market, or celebrate Orthodox Christmas in a disco with the promotion of boiled brandy and go-go. dancers. It’s just our shame. For Christians, Halloween is acceptable only as a lesson in history, sociology, or if it is mentioned when studying a foreign language because that is how we get acquainted with other people’s customs. Any disguise, visiting Halloween parties where you do not pay an admission fee if you wear a mask, or any mythology that spins around Halloween and supporting it, clashes with faith in the Good News of the Resurrection, and thus with Christianity.

We neglect Cyrillic alphabet, forget our old songs and folklore, reject Christian values, loathe patriotism and point the finger at it as if it were Nazism, and at every call of the Church that some things are incompatible with our faith – we are appalled why it is so narrow-minded and intolerant.

We have to part with some things, or we will disappear as a nation, and less and less of us have the right to be called Orthodox at all. You cannot serve both God and mammon. Decide. Be a follower of Christ and not a consumer of the goods they give you.