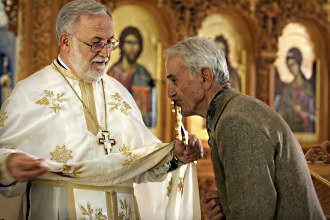 SAN GABRIEL – Lent began today for members of the Eastern Orthodox Christian faith, who will now embark on seven weeks of fasting and purification in preparation for Easter. At the St. Sava Serbian Orthodox Church in San Gabriel on Sunday, about 50 parishioners congregated to pray, take Holy Communion and perform other traditional rites. “(Lent) is our inner springtime,” Father Petar Jovanovic said. “It is our renewal.” While the basic idea of Lent in the Orthodox tradition is similar to that in Western churches, there are several key differences, Jovanovic said. Most noticeable is the difference in timing. Orthodox Lent is based on the Julian calendar and begins five days later than lent in the West, which is based on the Gregorian calendar, Jovanovic said. Easter also falls one week later than in Western churches. The observance of Lent differs in some ways as well, he said. “Our Lent is more strict,” Jovanovic said. Participants are urged to forgo all meat and dairy products, as well as alcohol through Easter Sunday, which falls on April 19 this year in the Orthodox tradition. This is done, “to school our odies to be able to participate in the spiritual life,” Jovanovic said, adding that Lent is intended to be a time of heightened spiritual focus. “It’s very hard,” said Alexander Adzic of Oxnard, who attended Sunday’s services with his 7-month-old daughter. “You must say no to things you usually say yes to.” “The meaning,” he added, “is to understand the food of the spirit.” Many Orthodox households will spend today, known as “Clean Monday,” to work on both physical cleaning in their homes as well as spiritual purification, Jovanovic said In observance of the holiday, additional church services at St. Sava, 1640 S. San Gabriel, will be held every Friday prior to Easter.